Practical exercise on NBS in Varna

On 30 May 2019, in the framework of the Annual Meeting of the chief safety and mobilisation officials from the Region of Varna (Bulgaria), the Regional Administration of Varna carried out a practical exercise with key stakeholders on design and implementation of Nature Based Solutions.

The meeting was hosted by the Municipality of Dolni Chiflik (which hosts also the RECONECT Collaborator area in the Kamchia River Basin) and was attended by key stakeholders working in the field of disaster management and risk mitigation, including governmental officials, representatives of local authorities (mayors and deputy mayors of municipalities and villages) and six experts from the Regional Administration of Varna engaged in the implementation of the RECONECT project.

A panel of the Meeting was devoted to the issues of flood risk prevention, and stakeholder interaction and coordination. Lyudmil Ikonomov from the Institute of Ecological Modernisation presented the technical and social aspects of the design and implementation of NBS. He gave examples from the recent field visit made during the RECONECT Meeting in Zwolle and presented some key NBS mechanisms included in the Dutch “Room for the River” Programme, relevant for the Kamchia River Basin as well.

The Practical Exercise was focused particularly on the Kamchia River basin and on the RECONECT pilot zone. It was guided by Dr. Lyudmil Ikonomov and Dr. Valeri Penchev from the Black Sea and Danube Development Association. It made use of the so called “Sketch Match” method: the participants were divided in five working groups and were given topographic and flood hazard maps of the pilot zone and photos of some parts of the Kamchia River, critical for flood prevention.  They got also pencils and rubbers to prepare a rough conceptual design for a NBS which in their opinion would reduce the flood risk in the pilot zone. Participants were not expected to have a deep knowledge on hydraulics, biodiversity and regional planning: Dr Ikonomov and Dr Penchev helped them with their engineering and environmental expertise.

At the end, each working group presented their results. The presentations demonstrated the good ability of the stakeholders to deal with such kind of tasks and revealed very quickly important barriers to the implementation of NBS in the pilot area.

The results gave an interesting insight of the thinking of the local stakeholders and were quite close to the “working hypothesis” previously elaborated by the RECONECT experts from IEM, BDCA and the Regional Administration.

The overall benefit of this exercise was the effective start-up of the co-creation process and the emerging of several new ideas for the Bulgarian project partners. 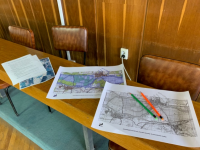 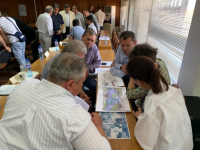